ST JAMES CHURCH, NEWBOTTLE WITH CHARLTON.
Saint and Shell
​A saint and his symbol 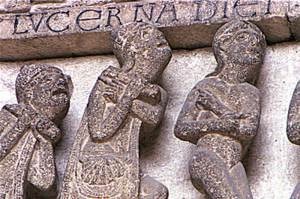 Saint James the Great
The Church at Newbottle is dedicated in honour of St James the Great.  He was one of the first group of disciples called by Jesus, along with Simon Peter and Andrew, and his younger brother John.  They were all fishermen, in partnership together.  James and John worked with their father Zebedee, and according to St Mark, with hired men too (Mark 1:19).  Their fishing territory was the northern waters of the Sea of Galilee and their home base was Bethsaida.  The place name means either house of fishing or fisherman.  St Matthew tells us that Zebedee’s wife was one of the women at the cross, Salome (Matthew 27:56).  The name James comes from the Hebrew and Greek Jacob and means Heel catcher.  The original Jacob was the second twin of Isaac and Rebecca who was born clutching the heel of the older son, Esau (Genesis 25:26).
Jesus called these followers to become fishers of people (Matthew 4:20) and later after a night of prayer he chose twelve to be apostles - sent men.  They were to be the first leaders of the church.  James always comes third in the list (Matthew 10:2-4, Mark 3:16f, and Luke 6:14f).  Jesus gave James and John a nickname; Boanerges, sons of thunder.  This suggests a fiery and destructive zeal, like a thunderstorm.  One of the stories, told by Luke, has the brothers asking Jesus whether they should call down fire on a Samaritan village which had not offered them hospitality (Luke 9:51f).  Perhaps that is the source of this rather ironic name.
James was one of the inner group of apostles who went with Jesus when Jairus’ daughter was raised from death.  With James and Simon Peter he was with Jesus on the Mount of Transfiguration and in the Garden of Gethsemane.  So he witnessed the glory and the agony of Christ.
But one of the most extraordinary stories is of either the brothers, or their mother, coming to ask a favour of Jesus, that they might sit the places of honour to Jesus’ right and left when he came into his kingdom.  Jesus asks them whether they can drink the cup which he is to drink and be baptised with his baptism, and they say with great confidence that they can.  Jesus tells them that they will indeed share his sufferings and we learn of this in the Acts of the Apostles.  King Herod Agrippa (King AD 41-44) seizes James and he is killed with the sword in the spring of AD 44 (Acts 12:2).  James is the first of the apostles to die for his faith.  Tradition holds that Saint John lived on into old age and died a natural death.
All of this so far from the Gospels but now legend takes over.  His friends gather James’ remains and take them to the coast where a boat miraculously appears and carries the body away to the port of Iria in north-western Spain, where, the story goes, James had preached the gospel.  Later his burial place was lost but was revealed in a vision to a hermit, Pelayo around the eighth or ninth centuries.  He saw a cloud of stars hovering above a field, and there were James’ relics. This is given as the origin of Compostela - the field of stars.  The local king, Alfonsus II of Asturias, built a new cathedral, and it became Santiago de Compostela - St James of the Field of Stars and a great centre of pilgrimage, and that is where the comes in.

Scallop shell
Give me my scallop shell of quiet;
My staff of faith to walk upon;
My scrip of joy, immortal diet;
My bottle of salvation;
My gown of glory(hope’s true gage);
And thus I'll make my pilgrimage.
​
Words of Sir Walter Raleigh (d. 1618) drawing on the mediaeval symbols of the pilgrim of which the shell, the staff and the scrip are especially associated with St James the Great.  The script is a small bag, rather like the handkerchief in which the traveller might try up his few possessions.  This staff is an obvious need for those walking long distances.
Pilgrimage was very popular in mediaeval times: the great centres were Walsingham in Norfolk, Canterbury for St Thomas Beckett, Rome for SS Peter and Paul, Jerusalem, and Vezelay in Burgundy where the remains of St Mary Magdalen were believed to be, and Santiago.  You may recall the wife of Bath in Chaucer's Canterbury Tales who in addition to her five husbands had been thrice to Jerusalem, also to Boulogne, Compostela and Cologne.  The Three Kings shrine is at Cologne.  These journeys were not easy and even if they did have something of the nature of a holiday, holidays were holy-days originally.  When you went to Rome the pilgrim was given a palm leaf as a token of having completed the pilgrimage, and in Santiago a shell. There is a carving at Silos not far from Burgos in northern Spain of Christ with the two disciples walking to Emmaus on the first Easter day (Luke 24:13 f) and he is shown with a shell, as the one who accompanies us on our pilgrimages.
The earliest known example of a pilgrim decorated with a shell is at Autun Cathedral in Burgundy from c. 1130-40.  There were many Routes overland from various starting points in France: Arles, Lyons, Vezelay, Orleans, some of which come together at Roncesvalles and all by reaching Burgos.
And why the shell for St James?  No one really knows but the shells were the leftovers from eating scallops, so there would be plenty around.  Pliny called them pectin after the Roman comb and the usual scallop shells depicted are pectin maximus.  Locally in Galicia they are called Vieira.  They are to be found in huge colonies for they are and they are great swimmers, having a rapid escape technique from predators.  Our parish banner depicts the staff with attached script, and three scallop shells in honour of St James.
Our lives, even when lived largely in one place, can be seen as pilgrimages.  We are on a journey through life, from birth to death: a journey with its ups and downs, its times of sorrow and its times of joy, of hardships and delights.  For Christian people this is a journey toward God and we travel surrounded by others of faith inspired by the saints, and with Christ as our companion on the Way.
Other churches dedicated to St James the great in the diocese of Peterborough are at Brackley (with St Peter), Edgcote, Syresham, Hollowell, Stowe-nine-churches (with St Michael), Paulersbury, Northampton, Gretton, Thrapston, Grafton Underwood and Thurning. 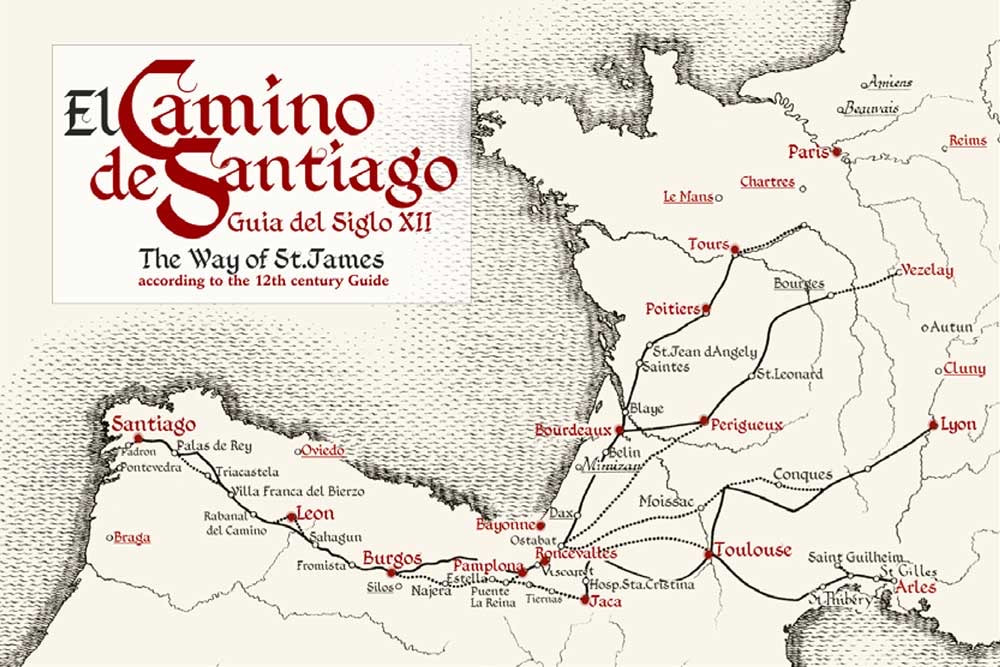